A Parasite for Sore Eyes: The Large Bee-fly

This particular Large Bee-fly (Bombylius major) was found clinging to one of our contractors’ hats earlier today and appeared perfectly happy to sit on a thumb and be photographed.

Named because of its mimicry of solitary bees and wasps, the distinctive adult Large Bee-fly feeds on nectar from flowers using its impressive proboscis, making it an excellent pollinator. However the true reason for this creature’s appearance only becomes apparent when it comes to breeding: the female uses its disguise to edge close to the burrows of solitary bees, wasps and beetles unnoticed before tossing its eggs in and flying away.

Soon after, the Large Bee-fly larvae hatch from the eggs and act as parasitoids by feeding from the bodies of the original larvae laid by the bee, wasp or beetle!

Throughout the remediation project we will create habitats that support fascinating creatures like the Large Bee-fly. 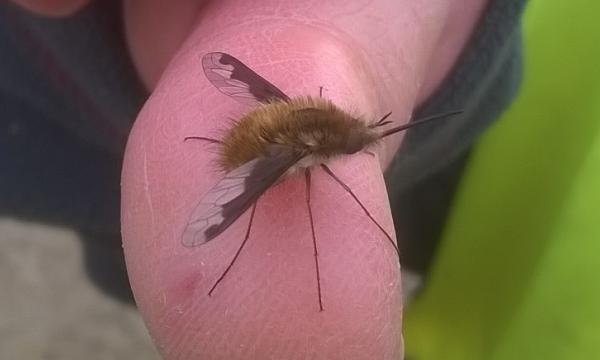